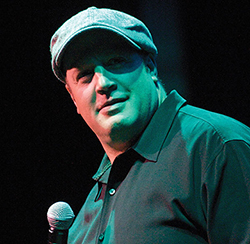 BOTH PERFORMANCES SOLD OUT!!


For one night only, the King of Long Island comes home in his first Staller Center appearance, blocks away from the streets that built him!

Ranked as one of the 100 greatest stand-ups by Comedy Central, his lauded specials Sweat The Small Stuff and Never Don’t Give Up have solidified James as one of the top comics of his generation. Now, James brings that incisive, irreverent stand-up to the Main Stage in an all-out hilarious evening. Returning to his Stony Brook roots, James will have audiences doubled over in laughter as he comes home- and brings his biting, uproarious wit with him.

Since performing his first Stand-up set at Long Island’s East Side Comedy Club in 1989, Kevin James has established himself as a powerhouse actor, writer, and comedian. Discovered at the 1996 Montreal Comedy Festival, he signed a deal with Paramount to develop his own sitcom, The King of Queens. Earning an Emmy nomination for his role, James starred in all nine seasons of the smash hit show, which continues to air daily in syndication. Moving from television to film, James’ iconic roles in the films Hitch, Paul Blart: Mall Cop, I Now Pronounce You Chuck and Larry, and Grown Ups catapulted him into stardom. He continues to dominate all of these mediums, having starred in the sitcoms Kevin Can Wait and The Crew and the new films Hubie Halloween, Home Team, and Becky, all while lending his voice to the Hotel Transylvania films.