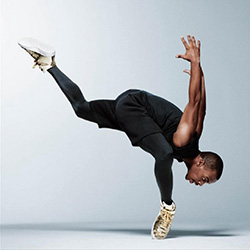 Charles “Lil Buck” Riley is a movement artist who is known for being an ambassador for Memphis Jookin, a freestyle-based dance involving intricate footwork. Raised in Memphis, Buck was introduced to the urban street dance style around age 14. After moving up in the Jookin ranks, he studied ballet for two years. With those combined skills, he quickly made a niche for himself by adding his own style and imagination to create signature moves, which include gliding across space as if gravity didn’t exist. In 2011, Buck performed with Yo-Yo Ma to Ma’s rendition of Saint-Saëns’ The Swan.

Film director Spike Jonze, who was in the audience, was so blown away by the performance that he recorded it on his phone and posted it on the internet. The video quickly went viral, with more than three million views on YouTube. Since then, Buck has performed with Cirque du Soleil’s Michael Jackson: One, Benjamin Millepied, Janelle Monae, and Madonna, amongst many others. Buck’s dancing abilities and unique style have made him a fashion & dance icon.

“While his agile physical instrument is astounding, Buck’s power derives from the ability to get to the bottom of what something feels like for him and then to express it to the world.” - NY Times

“Fueling it all is the emotion that drives his magnetic dancing. There is struggle and pain, joy and healing, and ultimately, a transformation — a root connecting the past to the present.” - NY Times