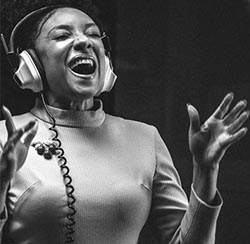 Back by popular demand! After bringing down the house in 2021, Shelea returns to the Staller Center Recital Hall.  With a voice that stirs the soul and hands that glide effortlessly over the keys, Sheléa represents a return to true artistry that has garnered attention and adoration from legends throughout the music industry. Her sultry sound is an exciting oasis.  Blending traditional pop, jazz, R&B and soul, Sheléa brings a contemporary edge to classics and a classic touch to contemporary pop standards.

Watch Video Here.
In 2012, after a video of her singing a medley of Whitney Houston covers went viral on YouTube, Sheléa was invited to perform at the White House. Shortly after, she toured in the Songs in the Key of Life Tour with her mentee Stevie Wonder, releasing her R&B charting album Love Fell On Me in the interim. Most recently, she plays the role of Dorinda in the film The Clark Sisters: First Ladies of Gospel.