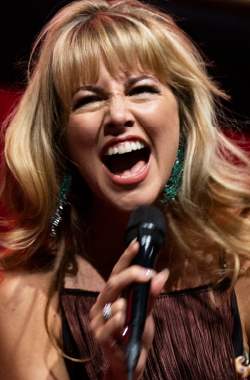 
With a meticulously trained, versatile voice of unbridled soul, Morgan James has dominated Broadway and Blues Halls alike. Her transfixing stage presence coupled with the unparalleled instrument that is her voice moved the Wall Street Journal to hail James as "the most promising young vocalist to come along so far this century." Once you witness James live, in-concert, you’ll realize they’re not exaggerating.

Having garnered internet fame for her covers, both solo and with online sensation Scott Bradlee’s Postmodern Jukebox, James’ performances have racked up over 200 million views on YouTube alone. Debuting on Epic Records with her first album, Hunter, James embarked on a multi-city tour in support of her second release, Reckless Abandon. In between her tours have been appearances on Broadway in shows like Motown: The Musical, Godspell, and The Addams Family.

With a  voice that holds its own in any type of performance, James will take over the Recital Hall stage free to unleash the soul and power packed inside of her, and let the full breadth of her talent come to life.