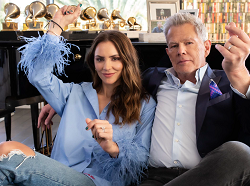 With a lot of time on their hands thanks to the pandemic, husband and wife-duo Foster and McPhee took to Instagram and began broadcasting The Kat and Dave Show directly from their living room. Realizing that they had quite the act going, the duo is now taking the viral sensation on the road.

In an intimate evening of the hits that have defined their incredible careers, this powerhouse duo will be performing a setlist of hits from Dave’s repertoire- with songs from Chicago, Whitney Houston, Celine Dion, Josh Groban, Michael Bublé, and more- and Kat’s- featuring songs from her acclaimed performances on Broadway and the West End, the cult favorite series Smash, and her career-launching season of American Idol.