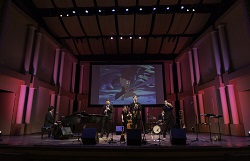 See projected cartoon classics paired with a tour-de-force of the Swing Era's zaniest and most creative music, written and or adapted for classic cartoons.

The Queen’s Cartoonists play music from both classic cartoons and contemporary animation. Their performances are synchronized to video projections of the original films, and the band leads the audience through a world of virtuosic musicianship, multi-instrumental mayhem, and comedy. Behind the project is the goal of presenting a concert for everybody - regardless of age, gender, or familiarity with the concert hall. Expect the unexpected from repertoire that includes the Golden Age of animation, cult cartoon classics, and modern animation, up close and personal in the Staller Center's intimate Recital Hall!